THE FRENCH HAD A NAME FOR IT 2
LOVERS & OTHER STRANGERS

LA LUMIÈRE D'EN FACE
THE LIGHT ACROSS THE STREET

LA VERITÉ SUR BÉBÉ DONGE
THE TRUTH ABOUT OUR MARRIAGE

LE DOS AU MUR
BACK TO THE WALL

Veteran Lacombe, who'd directed an early screenwriting effort by Henri-Georges Clouzot (LE DERNIER DES SIX, 1941), avoids sensationalizing Brigitte Bardot's sexiness (though we do get a brief glimpse of her "20-year-old glory"...) in a tale that chronicles the misfortunes of love that occur when events conspire to weaken their bond. Raymond Pellegrin is touching and disturbing as the husband powerless to stop his own deadly response to the course of human nature.

In addition to that titillating glimpse of her body, Bardot previews a more serious side of her thespian skills that would emerge later in EN CAS DE MALHEUR and LA VÉRITÉ.

LA VERITÉ SUR BÉBÉ DONGE / THE TRUTH ABOUT OUR MARRIAGE  8:00

In the fifties Jean Gabin transformed into a French institution, parlaying his granite impassivity into an endless series of films elevated by his mere presence. In BÉBÉ DONGE, however, he steps outside of that fatherly patina to create a fascinatingly unlikeable character—Francis Donge—a controlling, smug industrialist whom we know is a cad because his wife Bébé (played by the peerless Danielle Darrieux) has poisoned him!

Underrated director Henri Decoin (who'd been married to Darrieux for fourteen years and had not been poisoned by her…) fashions a tense tale, told partially in flashback as we see the marriage arc of the Donges and the sexual/emotional double standards that lead up to the most intimate of crimes. 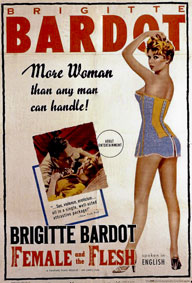 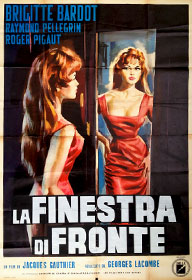 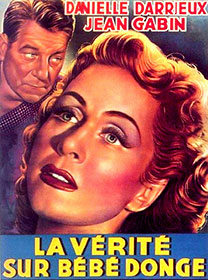