THE FRENCH HAD A NAME FOR IT 5

JUSQU'AU DERNIER
UNTIL THE LAST ONE

The snakes Henri Vidal meets in the big city (Paris) are much more dangerous than the reptiles he traps in the provinces. Outrageous plot twists, barely "coded" characters (Jean Tissier, Maria Mauban) who "befriend" him for nefarious purposes turn the tables on Vidal to the point where he's no longer the predator, but the prey.

Nineteen-year-old, notably baby-faced Françoise Arnoul plays Vidal's long-suffering girlfriend, who's powerless to dispel the dark turn of events. She provides us with a perversely entertaining "snake dance" as the Parisian hustlers try to zero in on her as well. This is a nasty and cunning piece of work by obscure Austrian expatriate director Emil E. Reinert—don't miss it!

Actor's director Henri Calef coaxes standout performances from Vidal and Maria Mauban in a tale of a married woman on the run aided by a cynical bargeman who agrees to help facilitate her escape. The only obstacle: the bargeman's truculent first mate (a masterfully "proletarian" performance from Daniel Ivernel).

Never has Vidal shown such command of a total character arc as he does here, bringing into play a panoply of conflicting emotions that swirl around him as the story progresses. Mauban matches him note for note, as they both warily let down their guard under increasingly perilous circumstances. A triumph of pacing and tone from the obscure but exceptional Calef.

He's a fugitive on the run who forces a bum (Brasseur) and his musician friend (Brassens) to hide him in the basement of a café run by an oblivious friend (our old friend Philippe Clay). As Vidal waits for the coast to clear, he woos the café owner's daughter (Carrel) to supply him money for his escape, promising to take the smitten girl along with him when he leaves. Brasseur slowly finds himself torn between his desire to help Vidal and his feelings for the girl—all of which means that the you-know-what will soon hit the fan... 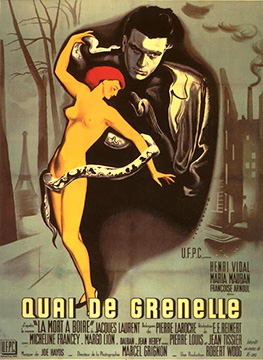 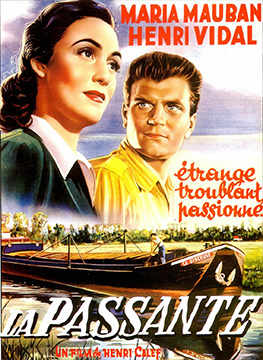 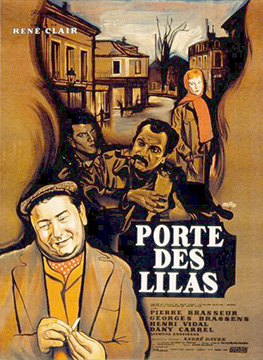 ► TICKETS for TRIPLE FEATURE starting at 5:45