THE FRENCH HAD A NAME FOR IT 3

SAT EVENING, NOV 5
The Many (Deadpan) Moods of Robert Hossein…

LES JEUX SONT FAITS
THE CHIPS ARE DOWN

Carné's 1939 masterpiece actually straddles poetic realism and the more hard-boiled film noir that coexisted in France in the 30s and would re-emerge in the USA at the end of World War II. Jean Gabin most fully embodies his proletarian persona here, literally trapped between competing impulses and desires, as Carné masterfully allegorizes the state of the French nation on the brink of war, and entering into a series of events that most certainly qualify as "noir." (Always a stickler for detail, Carné used four cinematographers to get the look he wanted.) With Jean Gabin, Arletty, Jules Berry, Jacqueline Laurent.

Chenal, pioneer of hard-boiled noir, beats everyone to the punch and turns James M.Cain's novel into a sordid, earthy but oddly sensitive tale of the tragic triangle that ensues when a drifter (Gravey) is hired to work for a May-December couple (Simon, Luchaire) at a roadhouse. Lust and greed soon prevail, but Luchaire's depthless longing will stay with you long after the end. (Chenal would have to leave France a year after the release of LE DERNIER TOURNANT due to his Jewish heritage.) With Michel Simon, Fernand Gravey, Corinne Luchaire. 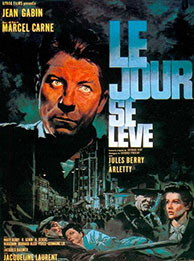 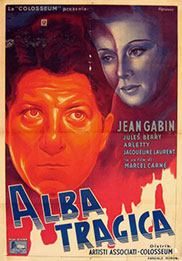 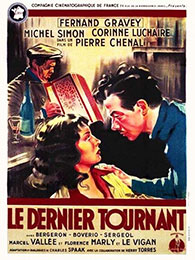